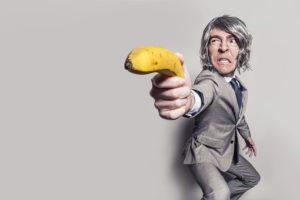 One of my earliest comedy heroes was a lovely man from Barnsley who, sadly, most people under 50 won’t have heard of. His name was Harry Worth. A warm, jovial character, he starred in his own sit-com through the late 60s and early 70s.

At the beginning of each episode, Harry would appear at the top of a busy main street. He would then utter the words “Hello, everyone, my name is Harry Worth”.

On hearing this, the street would clear immediately. People would rush to the other side of the road, shop doors would instantly close and the postman would throw himself into the postbox to hide.

In my early days of networking I often remembered dear old Harry when introducing myself as a Business Coach. While no-one actually ran away screaming, it’s fair to say I experienced the glazed eyes, the blank expressions and the sudden fascination with an unseen object just behind my right shoulder.

Coming from an environment where coaching was both widely used and almost universally accepted as a key tool for learning and development this was, at first, something of a shock. Indeed, at first it made me paranoid about matters of personal hygiene, was it my deodorant, I wondered?

Of course, the handy thing about being a coach is that you should be pretty hot at asking questions. So I did. It didn’t take me long to understand the situation within the SME environment. There was history, inasmuch as at various times over recent years funding was made available for SMEs to grow their businesses and this had led to a flood of “coaches” into the marketplace who, it appears, were somewhat mixed in their abilities and impact within the companies they worked with.

But it was more than that. And as I continued to network and listen to others pitching and talking about their business I came to realise what the real issue was. And it certainly doesn’t just apply to Business Coaches, but so many people in service industries, consultants, HR specialists, cost-reduction guys, marketing experts, etc. etc.

The nub of the problem, I believe, lies mainly in a failure to apply Habit No. 5 of Stephen Covey’s “7 Habits of Highly Effective People”, namely ‘seek first to understand, then be understood’.

Because so many people, largely in their desire to appear exactly what you’re looking for, can’t wait to tell you how marvellous they are, what qualifications they have, how many years experience, what books they’ve read, how many businesses they’ve bought and sold, how busy they are, how well connected. They often want to give you lots of unsolicited advice, trying to ‘fix’ you while not having a clue as to whether, in fact, you’re broken or not.

All this information may be relevant, or it may not. And unless you’re prepared to be quiet and seek to understand more about the person in front of you, you’ll never know, will you?

In a world of constant noise, anyone who purports to be truly interested in the development of others, irrespective of what you call yourself, should try hard to avoid the self-aggrandising nonsense and simply remember that all that any prospective client is generally interested in is can you help me?

Listening powerfully, seeking first to understand, and then, IF RELEVANT, suggesting a way forward is the age-old way of building a great reputation and avoids people crossing the road when they see you like poor Harry Worth, who wasn’t even a Business Coach!

Fancy Doing Things a Little Different in 2020? Here’s How…

Hey entrepreneur, are you for real?