Feeling “Zoomed Out?” Why not pick up the phone? 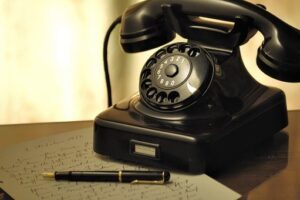 One of the umpteen changes we’re getting used to in lockdown is how universal Zoom has suddenly become. In an unbelievably short space of time even the word has gone from being a noun to a verb, to “Zoom” is almost as common as to “Google”. You may have noticed when setting up appointments with clients or prospective customers, that Zoom has almost become the default communication preference in an age where the coffee shop has become a fond but distant memory.

However, while Zoom has undoubtedly been a Godsend for so many people forcibly cut-off or isolated, many are now feeling “Zoomed out”, they’ve had enough of Zoom.

And while many of these reasons, understandably, are more to do with the lack of human interaction rather than a fundamental fault with the system, there’s little doubt that some of the reasons are linked to the service itself.

I use Zoom for both coaching and training and it has some really good features which have helped keep our business going in these difficult times. However, for 1-1 coaching and conversations, the phone is invariably my first choice. Here’s why:

The legendary speaker and educator, Earl Nightingale, once said, “If you want to be successful in life, simply watch what most people would do in a given situation, and then do the total opposite—nine times out of ten, you’ll receive greater rewards”. In a world where the phone often seems the poor relation of Zoom, texts and emails, you may find that using it more is a more pleasurable and productive experience.

Yes, Zoom can be great, but the phone can be greater, why not pick it up and go all retro?

Managing your Returning Team – Taking It Step by Step…

How are you feeling today?