Are we witnessing the end of true Leadership? 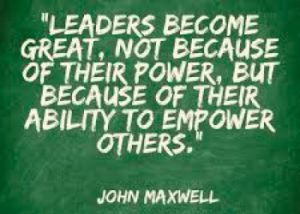 Like skittles toppled by a bowling ball the number of leaders falling over the past few weeks has, it seems, been unprecedented. Prime Minister Cameron, the EU Commissioner Lord Hill, Nigel Farage. Perhaps more predictably, the England football manager’s fallen on his sword and Boris Johnson resigned before he was even given the job!

Jeremy Corbyn (at the time of writing) is hanging on by the skin of his teeth, but over 20 of his shadow cabinet ministers have resigned. He must feel a little like the elderly driver in the old joke who never had a car accident but had witnessed loads around him!

What does this epidemic of fallen men say about leadership today? Why is it that so many have decided to either throw in the towel or, when push came to shove, not even enter the ring?

And since when was a true leader only judged on one particular result? Granted, that’s been the situation in football for a long time but, putting aside Liverpool manager Bill Shankly’s comment that football is more important than life or death, and turning to the real world, could it be that in the absence of qualities great leaders should possess, the modern chief is judged only on what they achieve, even if they’re not in full control of the outcome?

While everyone has a different perspective on what makes a good leader, the same names come up fairly constantly when considering this subject. Abraham Lincoln, Mahatma Ghandi, Martin Luther King, Nelson Mandela, Winston Churchill. What was it about these guys that made them so special, and why does there seem to be a dearth of such leaders today?

Conventional wisdom tells us that two of the most important qualities of a leader are humility and the willingness to listen. All these erstwhile leaders had this in common. Even Churchill, who certainly had a reputation for leading from the front, said, “Courage is what it takes to stand up and speak; courage is also what it takes to sit down and listen”.

And none of these people ever quit. Tragically, three of them were assassinated but not before they had shown an indefatigability (try saying that when you’ve had a few!) so sadly lacking today. They had a vision for the world and remained true to their convictions all their lives, not just when it seemed politically expedient to do so.

Nelson Mandela spent 27 years behind bars and yet never stopped being true to the beliefs he held. Gandhi, too, was imprisoned many times for his convictions and Churchill remained steadfast during the dark, early years of the war, wryly observing later that ‘success consists of going from failure to failure without any loss of enthusiasm’.

They were also all able to deeply connect with people on an emotional level. This wasn’t just down to ‘charisma’, a relatively modern quality, but more their empathy, innate understanding and unwavering desire to really improve the quality of people’s lives, whether it was by abolishing slavery, standing up for civil rights or defeating fascism.

Sadly, it now seems that sound bites, posturing, how you look and dress, being media-savvy, never admitting you’re wrong, and, in the case of certain would-be presidential candidates, downright nastiness mixed with good old-fashioned megalomania, are considered to be more important qualities for today’s leaders.

And perhaps that goes a long way to explaining why so many of them seem to fall over and capitulate much easier than the great leaders of the past. Maybe if, as a society, we placed more importance on qualities which have served mankind for centuries, as opposed to the ‘spin and grin’ of todays would-be heads, we would be better led and served. In the final analysis do we get the leaders we deserve?

Talking about spin and grin, yesterday’s publication of the Chilcot report brought further proof, if any were needed, of the type of disastrous leadership we have had to endure in recent times. A long overdue indictment of a premier who, for many, was the very epitome of these shallow, short-term, image conscious qualities which have led to more recent falls from grace.

Now was that Margaret Thatcher or St Francis of Assisi? I always seem to get those two leaders mixed up!

Silence – the one thing we can all contribute more of

The Coaching Conundrum – if it works, why don’t more managers do it?